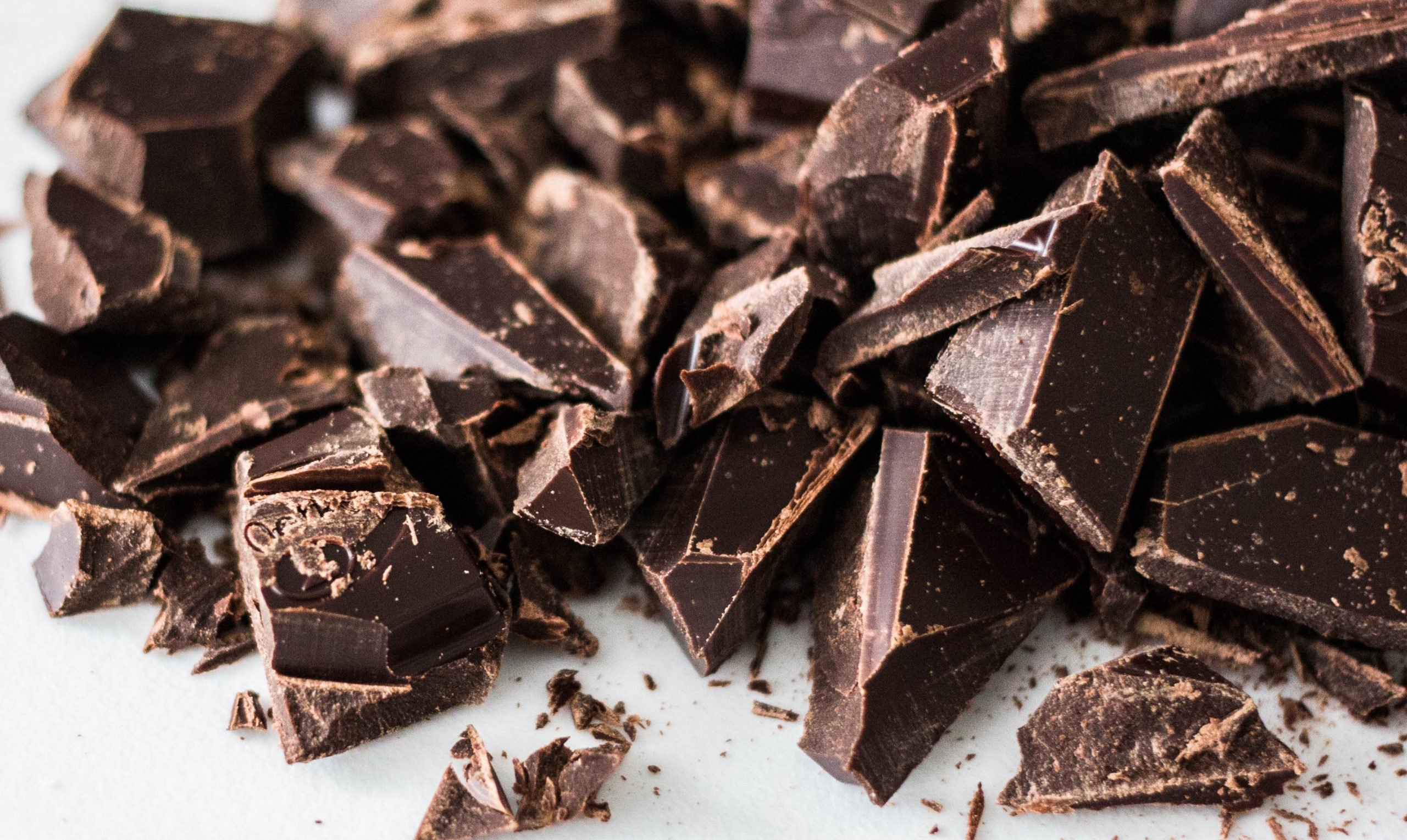 Is dark chocolate vegan? Don’t despair! Just because you’re adopting a plant-based diet doesn’t mean that you have to give up chocolate! At least, not dark chocolate.

It’s one of those questions you don’t often ponder until you have to. Can vegans eat chocolate? And if so, what chocolate is vegan?

To answer, let’s take a look at the ingredients in chocolate. At its core, the primary ingredient of any chocolate product is cacao. Cacao seeds are taken from the cacao plant, and then they are crushed and turned into a paste or powder.

The main ingredient, cacao, is entirely plant-based. However, to make chocolate as we know and love it (in chocolate bar form for example), other ingredients need to be added. This is where vegans begin to find that a lot of chocolate is not vegan-friendly!

There are three major varieties of chocolate that you’ll find in a store, and they all have differing levels of dairy in the recipe:

Unfortunately, it’s not as easy as saying, yes, all dark chocolate is vegan. Dark chocolate can be vegan-friendly chocolate, but this needs to be checked.

Dark chocolate is usually given a percentage rating, which depends on the percentage of cacao that’s in the recipe. 55 percent to 70 percent is normal; 100 percent is rare.

The higher the percentage of cacao, though, the more likely the dark chocolate is to be vegan, as there are fewer additional products in the recipe. Typical dark vegan chocolate ingredients, in addition to the cacao, include sugar and cacao butter. These are also vegan.

Dark chocolate is essentially high-cacao chocolate, but is dark chocolate dairy-free? Unfortunately, just because it has a high cacao rating, this doesn’t mean there isn’t going to be dairy. Many dark chocolate brands are not actually milk-free chocolate, which makes them non-vegan.

Vegan chocolate lovers need to look out for non-vegan additives that could be present in dark chocolate ingredients, particularly as recipes and production techniques vary from one brand to the next.

HOW CAN I TELL IF DARK CHOCOLATE IS VEGAN?

Despite all the potential dairy and animal products that could well be present in dark chocolate, it’s actually rather easy to know if your chocolate is vegan!

Dark chocolate without any milk or other animal products is going to be labeled, specifically, as vegan. In fact, these days, it’s going to be very clear. You can read the ingredient list to be certain, but with so much focus on plant-based products, vegan chocolate brands want you to know that their chocolate is, in fact vegan!

This goes for major brands as well as small suppliers, and you’ll often see the large ‘V’ for vegan sign on the outside packaging (or the chocolate might even have the word ‘vegan’ in the name).

There are a few specific vegan dark chocolate brands that you can look out for when you’re shopping. The following brands produce vegan dark chocolate and are likely to be stocked in most stores (or they can be easily ordered from online shops). And they all taste absolutely delicious.

Remember, though, some of these brands offer both vegan and non-vegan products, so always be safe and check the labels for that handy vegan sign!

We love enjoying a sneaky bar or box of chocolates, and so we are happy to say that vegans can eat dark chocolate. However, as we’ve stressed throughout the article, it’s important to check the packaging and to check that the bar you’re buying is vegan-friendly. In Whitakers Chocolates case, look out for the Vegan Society trademark which appears on the front of all of their packaging.

Unfortunately, while dark chocolate can be vegan, it’s not always vegan. Annoying, we know, but it’s a simple task to check. Increasingly, vegan dark chocolate is becoming the norm too. More and more brands are producing dark chocolate to a non-dairy, vegan recipe.

It’s good to know, too, that dark, vegan chocolate is going to be healthier than other varieties of chocolate. There are more natural ingredients in the recipe and far less sugar!

If you’re a dark chocolate lover & you’re vegan, why don’t you check out our full range of Vegan chocolates and gifts, click here

Whitakers Chocolates have over 130 years love and experience in the chocolate industry. Each year they push the boundaries to bring you (the consumer) what you want and longingly crave. With this in mind, give Whitakers a social media follow so you can be kept up to date with their new product launches. They even encourage the customers to put forward their ideas, so if you have a great idea for a new product, get in touch!